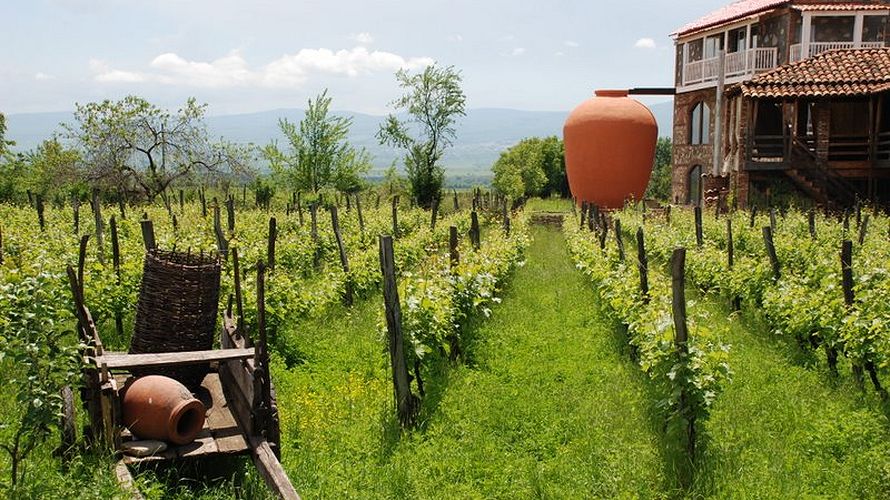 25 Apr Georgia, the pearl of Caucasus

Posted at 14:43h in Non classé by Sophie Roche
0 Likes

Georgia is a land of contrasts at the crossroads of East and West. For thousands of years, merchants and travelers visited it by taking the shortest route that successfully connected Europe and Asia, and passed through Georgia: the Silk Road.

And it is thanks to her that the cities of Uplistsikhe, Mtskheta, Tbilisi and Telavi have been developed and already well populated since the 1st century. All these travelers have left behind their traces in culture, music and monuments, including several sites inscribed in the heritage of UNESCO but also the oldest hominid remains, dated over 1.8 million. years, were found near the capital, Tbilisi.

From the architecture of old Tbilisi to the vineyards of Kakheti, from ancient Svaneti stone towers to beaches and Batumi’s nightlife, there is always something inspiring and exciting. In Georgia you can ski in the Caucasus mountains, the highest chain in Europe in the morning, and relax on the Black Sea coast in the afternoon. Then enjoy delicious food and wine at a traditional Supra (feast) one day, to finally detox in a spa and natural sauna the other day.

But Georgia is also a very welcoming and original culture, which explains its world-famous hospitality. With its own alphabet and language, and well-known artists around the world, it will amaze you and offer a pleasure every moment, every turn.

Area: 69,700km2 only, but Georgia’s biodiversity is immense: sub-tropical swamps, semi-desert, high alpine meadows and towering snow-covered peaks that can be seen 100 kilometers apart. There are more than 40 protected areas.

Maximum altitude: 5,193 for Mount Chkhara, to the north in the Greater Caucasus.

0.7% of Russians, Ossetians (people living in the Caucasus), Russia and Georgia, and Yazidis a sectarian minority followers of a monotheism derived from ancient beliefs rooted in ancient Iran.

Climate: Its geography gives Georgia contrasting climatic conditions. To the west, the Black Sea acts as a regulator with mild winters, especially as the Great Caucasus (the imposing mountain range to the north) blocks the cold air from the north, and mild summers.

To the east, the air is drier and temperature differences are widening. The winter along the coast is quite mild, since the average temperature of January is around 7 degrees: the sea attenuates its climate but let’s not forget that beyond the Caucasus there are the icy plains from Russia. However summer is quite hot, averaging around 23 degrees.

More than 2400 mineral springs claim that Georgia was a privileged center of spa life. The current location of the capital, Tbilisi, was chosen because of its sulphurous baths which are today in the center of the city. 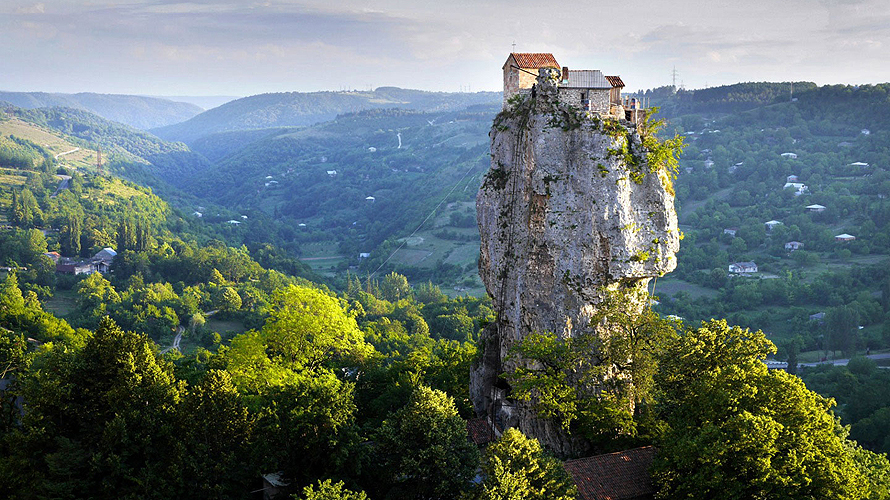 Georgia is a sovereign state located in the Caucasus region of Eurasia. Located at the crossroads of West Asia and Eastern Europe, it is bounded on the west by the Black Sea, on the north by Russia, on the south by Turkey and Armenia and on the south-east by Azerbaijan.

An endless wonderland, preserved from modern tourism and retaining its authentic character: once experienced, he will stay with you forever. Exploring Georgia is a constant pleasure.

From its verdant valleys dotted with vineyards to its ancient churches and watchtowers perched in fantastic mountainous landscapes, it is one of the most beautiful countries in the world and a wonderful canvas for hikers, riders, cyclists, skiers, travelers of all kinds. Its proud and cultured inhabitants are equally exceptional: Georgia claims to be the cradle of wine and it is a place where visitors are considered blessings and where hospitality is the essence of life.

Many countries have ancient origins but there are very few like Georgia whose history is about 2 million years!

Troglodyte cities classified as UNESCO world heritage, a viticulture that dates back to 8000 years, a cultural offer of dancing and ballets dizzying .. and then history and religion because it is one of the first countries in the world to convert to Christianity in the AD’ 4th century, and at the same time it is one of the few countries where churches, mosques, synagogues and chapels coexist peacefully.

AROUND WINE AND GODS 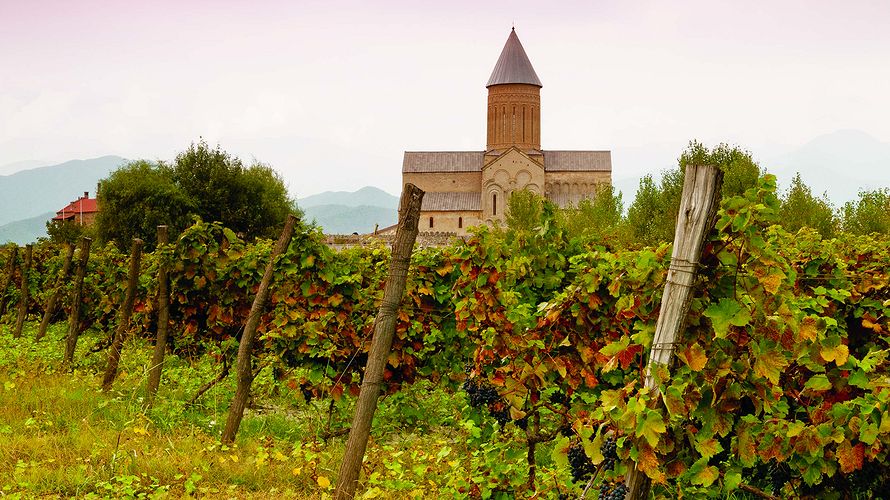 Wine’s land its also a land of water. Georgia’s water is one of its main riches and is a major component of its exports. The soil of the country is full of hot and sulfurous mineral springs that go back to the legend of the foundation of the city, since King Gorgasali would have decided to do so by seeing springing water from the ground.

Like water, the concept of welcome has remained a point of honor for all Georgians. As tourism is still underdeveloped, the foreigner will always be seen primarily as a guest. Friendship is a key concept of Georgian social life, and its meaning extends beyond the purely private or affective sphere.

The friends call themselves “my brother man” (czech dzmakatsi) and that does not stick to macho relations, the friendships between women, or between men and women, are also very strong. At the end of the banquet, the men who have sealed their friendship in this ritual are constantly praising themselves, singing together and embracing each other. On Rustaveli Avenue in Tbilisi, women will sometimes be seen wandering arm in arm and men strolling by the shoulder or neck. 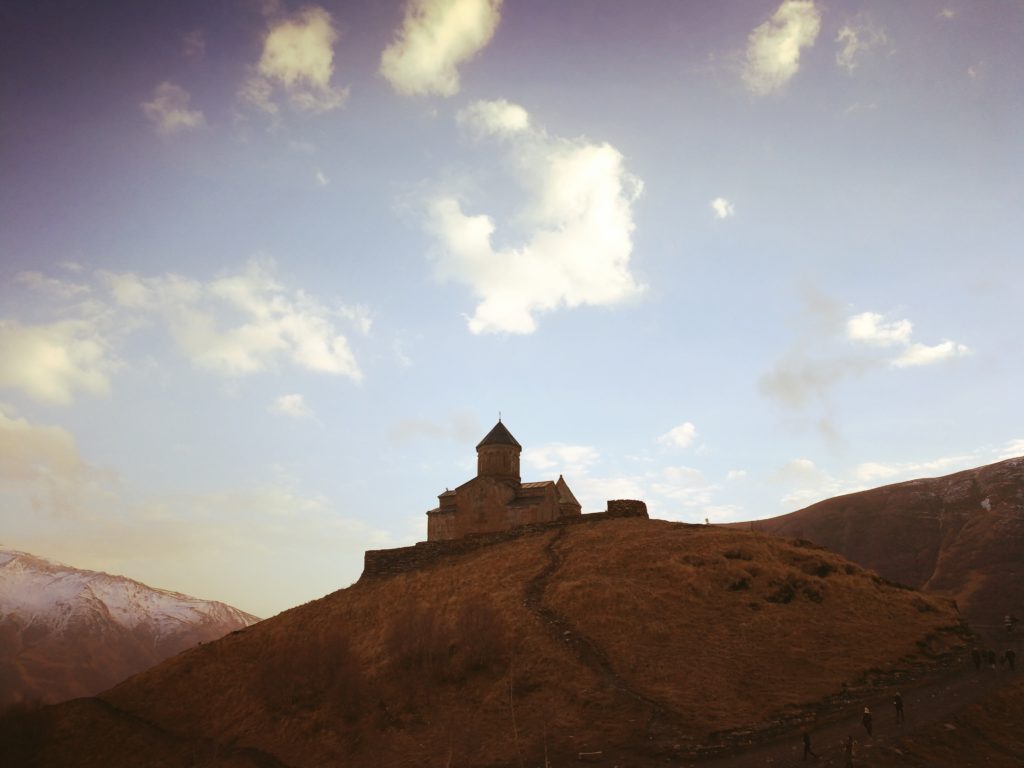 The very strong monastic activity which, as one of the most significant phenomena in Georgian history since the 6th century, was very widespread in the country guided by Saint David who founded the important complex of Garedja located on the border between Azerbaijan and Georgia. In the Middle Ages, Orthodox monasteries formed a cultural broth sheltering scholars, scientists, and artists. In the eleventh and twelfth centuries Georgian monks created some of the most brilliant academies of the time, developing the art of fresco and illumination or polyphonic liturgies, while developing original architectural techniques.

The mountains represent one of Georgia’s most valuable assets for its unique landscape. Centuries ago the western part was known as Colchis, while the eastern plateau was called Iberia. The Greater Caucasus mountain range forms the northern border of Georgia, while the southern part of the country is bordered by the mountains of the Lower Caucasus. The Likhi Range divides the country into east and west halves.

A paradise for hikers, Georgia offers absolutely spectacular views: the limpid white of the ice covering the high peaks of rivers, cut with the saturated green valleys, the yellow grass of the plains and the anthracite reflections of the black Sea..

An incredible heritage and peaks of more than 5000 meters!

Our Wine-tour in Armenia & Georgia

SeaWine Travel uses cookies to provide you with optimal navigation. By continuing your visit to this site, you accept the use of cookies. Learn more.I accept